Elis F. Stenman was a mechanical engineer whose claim to fame is that he designed the machines that made paper clips.

That in and of itself might not seem like an interesting fact, but in 1922, Mr. Stenman did create something that has become a curiosity over the last century: a summer home built almost entirely out of paper. 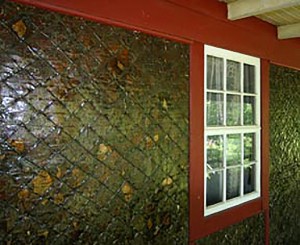 Stenman knew that paper was not only cheap but was also known to be good insulation at the time. However, as he began to build the house, he found that he was intrigued by the idea of using the paper as the actual building material, not just to fill the walls. He began with layers of paper and glue and then covered those layers with a lot of vanish. Pleased with the results he was seeing Stenman branched out his endeavor and crafted furniture for the house out of paper as well. Though the framework of the house and the floor are made out of wood, the rest of the house consists solely of layers of paper and varnish. The amazing thing about this construction is the fact that it is still standing after 70 years.

Stenman also managed to leave behind a significant amount of history in this house, most likely unintentionally. Over the years the varnish has peeled away from some spots in the house and as it has the news stories on the pages underneath have become visible. News stories, headlines, and ads on these worn pages give a snapshot from when the house was built. To some extent the house is a time capsule of a bygone era. From Herbert Hoover’s presidential run to recipes of the week, visitors get a glimpse into our American history. 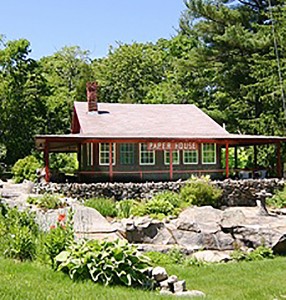 Family members of Mr. Stenman’s still run the house, which is a pretty popular tourist site. It opened to the public in or around in the 1930s when the family was still using it as their summer home. The Paper House is located at 52 Pigeon Hill Street in Rockport, Massachusetts. It is open 10am-5pm every day from spring to fall. Admission is $2.00 for adults and $1 for children 6-14 (children under six are free).

Information about the house can also be found at paperhouserockport.com.